This performance class mounts a play using a tight ensemble of middle school actors. The play will be professionally directed and fully produced — with a custom-designed costume delivered to your door, a “Zoomologist” to help with tech, a virtual background set, and filmed vignettes integrated into the play. The public performance is part of our March Madness Festival.

This innovative class is for experienced performers as well as less experienced actors who are eager and dedicated.

LIMITED AVAILABILITY: Cast size is limited to 11 – 12 performers. We recommend registering for the first audition you can attend. 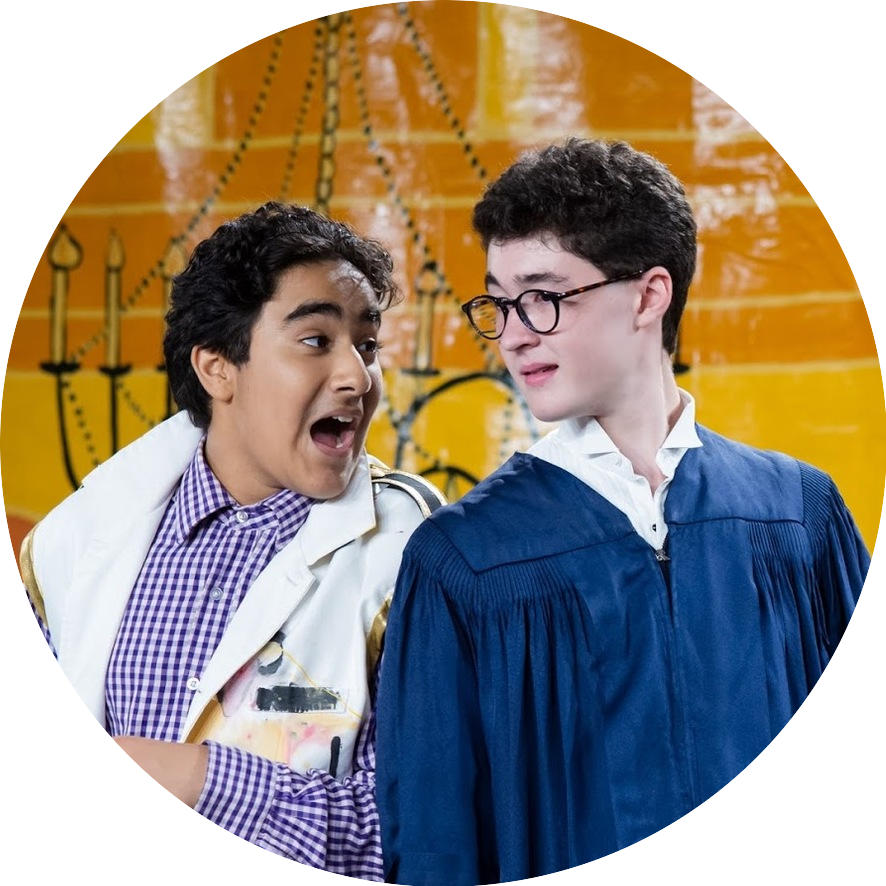 Puffs is a fast-paced romp through the ‘Seven Increasingly Eventful Years at a Certain School of Magic and Magic.’ For “Potter”philiacs who are eager to revisit that world, Puffs exudes a jovial, winking fondness for all things Harry! This clever and inventive play gives you a new look at a familiar adventure from the perspective of three potential heroes just trying to make it through a magic school that proves to be very dangerous for children. Alongside them are the Puffs, a group of well-meaning, loyal outsiders with a passion for badgers! Their hilariously heartfelt and epic journey takes the classic story to new places and reimagines what a boy wizard hero can be.

By Matt Cox, Puffs is not authorized, sanctioned, licensed or endorsed by J.K Rowling, Warner Bros. or any person or company associated with the Harry Potter books, films or play.

Ozma of Oz is a contemporary original play woven into a timely new story. This modern fantasy explores the relationship between a now teenage Dorothy and her elderly Uncle Henry. Dorothy reluctantly accompanies her eccentric uncle on his life-long dream voyage to Australia. They argue during a violent storm and are both blown off the boat to Oz, a land where there is no time. Unwittingly, they activate Tic Toc and time begins in Oz. Their adventures lead them to Bill, a giant wisecracking chicken, the wacky Wheelers, the vain and vicious Langwidere and, finally, to the super strong, wonderfully wise Ozma. Ozma rescues Uncle Henry from the lapideous lair of the volcanic gnome king and teaches Dorothy to look beyond Uncle Henry’s outward signs of aging to recognize his true competence, energy and worth. By award-winning playwright Suzan Zeder.

Our Winter Performances require an audition to enroll.

There’s no need to prepare anything in advance! You’ll read from the script and play improvisation games.

The Thespians have a combined audition, and you will be cast in the show that will give you the most joy and challenge. If you have a preference you can request it and we will keep it in mind when casting, but we won’t guarantee that you get your first choice.

No need to stress out about the audition! We create a playful and supportive environment where returning Traveling Players can reconnect with friends and newcomers can be welcomed to our community. Over the course of the audition, you will read from the script as well as take part in improvisations and discussions. Our community develops acting skills in an environment noted for its work ethic, creativity and kindness.

We’ve been told that Traveling Players auditions are the most fun auditions our students have ever attended. We intend to keep it that way.

Auditions are binding, meaning if you are accepted, then you must enroll. If you attend auditions and discover Traveling Players is not the ensemble for you, then please email us within 24 hours after the audition to withdraw your audition.

Our rehearsals will include text analysis, acting exercises, movement workshops and improvisational games that explore the world of the play. The class is appropriate for experienced actors as well as eager and committed newbies.

Our kids have taken classes year round. We have not found a better acting program. Our kids have built lasting friendships with the staff and fellow campers.

Want to know what others are saying about our work?

Current 6th or 9th Grader? You've got a choice year!

6th and 9th graders have choices at Traveling Players! You can choose to either age up into an older age group, or stay and be a leader in the younger age group – either way you’re sure to have a ton of fun!

If you have any questions about which program would be perfect for you please call (703-987-1712) or email (campdirector@travelingplayers.org) us and we will be more than happy to help you find the best fit!

What’s a Pod? To fight the social isolation kids are feeling right now, some parents are choosing to “take camp” with another family. Both kids would be at one house with their laptops and headphones, either inside or outside. During breaks, they could kick a soccer ball, eat brownies, walk the dog, or help each other memorize lines. They could be at the same house all the time, alternate houses, or only Pod certain days of the week. We’re calling these extended families “Pods!”

Form a Pod! If you’re interested, just let us know (campdirector@travelingplayers.org) and we’ll connect you to another family who is similarly interested. Then you can discover if you are both comfortable with the level of exposure in relation to coronavirus, if you live close to each other, and other logistics. We recommend keeping your Pod tight and consistent, and taking appropriate precautions as outlined by the CDC.

Separate Studios: Already have two or more campers in your home? Congrats! You already have a Pod! If the campers are in different ensembles, then they should each have a Studio of their own (separate rooms, trading off with one person working inside and the other outside). If campers are in the same ensemble, than they can work in the same room but each camper should wear wireless headphones to avoid feedback while still allowing the campers freedom of movement.

After the final performance […] I was so sad to put my costumes on the front porch, to be picked up. I thought about all I had learned in four weeks, the fun I had, and the friends I had made. It all went by so quickly, and I will really miss it all. I can’t wait to come back next year, and see everyone again! After a lonely spring with the quarantine and COVID-19, this was a great way to reconnect with like-minded friends and jump-start my summer in the most amazing way!